Am I Addicted to Heroin? 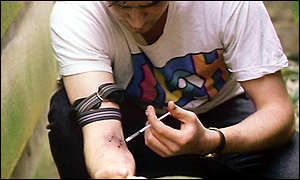 Heroin use has seen a resurgence since the 60s and 70s with more and more people trying the drug for the first time than ever before. According to the National Institute on Drug Abuse, as many as 42 million Americans reported trying heroin on at least one occasion as of 2011.

As one of the most addictive drugs around, it's estimated that 23 percent of people who try the drug will become addicted to heroin's effects. Someone addicted to heroin may notice certain signs taking shape, especially when it comes to his or her ability to cope with daily life when not taking the drug.

Heroin's effects on a person's brain goes past the physical impact, reaching into his or her overall mindset in terms of motivations, perceptions and identity. Over time, being addicted to heroin becomes a lifestyle all its own where a person's behaviors and daily routines revolve around getting and using the drug.

Heroin works as central nervous system depressant, slowing down any and all processes regulated by the central nervous system, according to the University of Maryland. When ingested, this drug causes certain neurotransmitter-producing brain cells to secrete excess amounts of serotonin, norepinephrine and dopamine.

These interactions account for the "high" feelings users experience when using the drug. When a person becomes addicted to heroin, the drug's effects have essentially taken over central nervous system functions.

Someone addicted to heroin develops physical signs of the drug's damaging effects. Over time, heroin deteriorates central nervous system functions leaving it unable to regulate bodily processes as normal. Under these conditions, certain bodily functions start to break down, which users experience as withdrawal effects. Withdrawal effects may take the form of:

With heroin directly altering brain chemical outputs, a person addicted to heroin will likely develop psychological signs of addiction fairly quickly. These signs not only take away from a person's overall quality of life, but also work to perpetuate the addiction cycle.

As the brain becomes increasingly dependent on the drug's effects, someone addicted to heroin will start to behave differently in regards to his or her responsibilities and social interactions. Behavior changes reflect a person's growing preoccupation with getting and using the drug.

Changes in Behavior to Watch Out For

By the time lifestyle changes take effect, the addiction has taken full control over a person's life. Being addicted to heroin drives users to create lifestyles that support the addiction regardless of the negative consequences involved.

More oftentimes than not, the addict's friends and family will spot the signs of heroin addiction before the addict does.