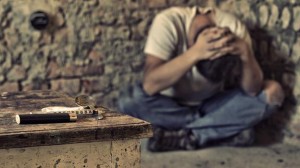 Heroin withdrawal is not only uncomfortable and irritating but painful as well. Attending treatment such as heroin addiction rehab or detox can be extremely beneficial in helping one cope with heroin withdrawal.

However, if you choose to go through withdrawal from heroin at home and without professional treatment, there are other coping methods you can use as well.

The NLM states that clonidine is "the most commonly used medication" to treat the symptoms of heroin and other types of opioid withdrawal, mainly because it is not addictive in nature like the other two medications are. Any one f these, though, will curb your withdrawal symptoms and make it much easier to cope with them as they will be less intense. Buprenorphine can be prescribed by specific doctors with certification to do so, and methadone and clonidine can be given at specific withdrawal treatment centers.

For those who decide to go through withdrawal at home and without the aid of detox programs, over-the-counter medication can be useful too. Some individuals take aspirin or acetaminophen to curb their muscle aches, and over-the-counter diarrhea and nausea medicines can also be helpful in treating these intense and uncomfortable symptoms.

According to the NIDA, "Symptoms of [heroin] withdrawal include:

Many of these symptoms are similar to those caused by sickness, which is why many individuals first assume that they have a bad case of the flu and not withdrawal symptoms caused by heroin abuse.

If you did have the flu, however, you would take time off from your responsibilities like work, school, and other activities. The same should be done to make coping with heroin withdrawal much easier. It can be incredibly difficult to deal with these symptoms when you are also trying to manage your life as if you were at a hundred percent, health-wise. Because you are not, you need to give yourself time to recover.

Talk to a Friend

Talking to a friend or loved one or even asking someone to move in with you during this time will make coping with heroin withdrawal symptoms much easier and safer. Depression and suicidal thoughts can often occur during intense heroin withdrawal, and having someone with you can protect you from some of the issues these feelings could cause if you were alone.

Also, just being able to talk to someone is extremely beneficial as you will feel less alone in what you are dealing with. It will make your symptoms seem less intense, your cravings less dangerous, and your overall recovery more possible if you have a friend you can count on during this time.