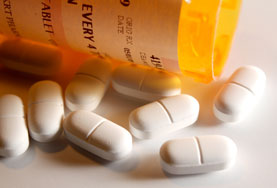 Painkillers definitely have their place, as anyone who has ever underwent painful surgery, suffered with a broken bone, severe burns, or other serious injury, or has a disease that can cause intense pain (such as cancer).

However, they are also some of the most widely-abused drugs, and health care practitioners as well as those who take or administer them should be aware of this. Almost all painkillers have morphine or a derivative of morphine in them. Morphine is extracted from the opium poppy, which is mainly grown in countries in and around Southeast Asia.

Where do legal drug manufacturers get opium from? Isn't it an illegal or controlled substance? The United States obtains the opium ingredients used to manufacture drugs containing opiate derivatives by working with countries where the opium poppy is easily grown (that is, growing conditions are optimal for growing this plant). These include Turkey, Myanmar, and Tasmania. The plants are grown, harvested, processed, and shipped under very controlled conditions. Frequent checks are made to ensure that all laws and regulations are being observed.

Technically, an opium plant isn't illegal, so there are no actual controls on the plants. However, once the morphine is derived, that substance is then under the control of the Drug Enforcement Agency, the Food and Drug Administration, and other government agencies that are tasked with controlling prescription drugs. So, then, it becomes a controlled substance.

This does not mean that a person should go out and start growing a personal supply of opium. It's best to leave this up to those who are licensed or permitted by the US to do this.

There are a number of medications that contain this ingredient. All of these medications, must have a written prescription in order to be legally obtained. Some of these drugs include Codeine, Oxycontin, and Oxycodone.

Codeine is a common morphine derivative. It is used in medications prescribed for severe cough due to cold, flu, or other respiratory diseases. Sometimes, codeine is also combined with acetaminophen or other non-narcotic pain relievers to create a drug that lasts longer and works faster and more effectively.

When used for coughing, Codeine works by suppressing signals sent from the brain that stimulates the cough reflex. When it is used for pain relief, it works to actually change the way the body receives pain sensors.

Oxycontin is a common pain relieving drug. It is rather strong; thus, it is used to treat severe pain, such as that suffered by cancer patients or other painful conditions. It can also be combined with other non-narcotic medications such as Aspirin or Ibuprofen.

In some cases, Oxycontin can be used to help people who are trying to overcome an opiate addiction, such as one to heroin, go through the withdrawal phase more easily. Oxycontin helps ease the symptoms, such as nausea, sweating, muscle tremors, pain, and the urges or cravings that become stronger the longer the drug is denied.

Hydrocodone (you may be more familiar with its brand name - Vicodin), is also used for cough suppressant reasons as well as for pain relief. It is believed by some people to work better than codeine in relieving chronic cough. As a painkiller, this is one of the most commonly prescribed drugs.

How Does Painkiller Abuse Happen?

Painkiller abuse in adults happens in the same ways as any other type of drug abuse does. One either takes it long after it is no longer necessary, takes more than is prescribed, or takes it more frequently than is prescribed. Many adolescents begin to abuse painkillers as a result of being "introduced" to these types of drugs by friends. Or, they may have heard friends talk about "getting high" on painkillers, see a prescription in the home, and decide to try it themselves. Either one of these scenarios can lead to further painkiller abuse.

How Can I Prevent Painkiller Abuse

If you are prescribed a painkiller, only use it for as long as it is really necessary. Once your pain is controlled or begins to diminish, switch to non-narcotic painkillers. You can also try drug-free painkilling methods such as elevating an affected limb, applying heat or ice to a painful area (if your physician says this is all right) or having the area massaged (again, with your doctor's approval).

Once you have stopped taking the painkiller, either store it somewhere where other family members cannot get access to it, or go ahead and destroy the remaining medication. Flush it, crush it, or otherwise render it unusable.