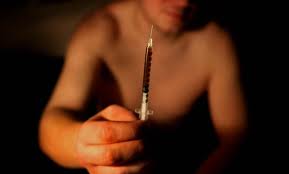 Once a person becomes addicted to pain meds like Hydrocodone, Oxycodone, Demerol or other prescription narcotic analgesics, they have to continue their use to avoid very uncomfortable withdrawal symptoms. Compulsive cravings and uncomfortable physical symptoms of withdrawal begin to kick in once the high and other opiate effects begin to wear off so people feel an intense need to repeat their abuse.

Now that prescription painkillers are harder to obtain a lot of addicts are seeking out other drugs like heroin in order to satisfy their intense opiate cravings, but that's not the only reason. Many people who abuse prescription pain medications move on to heroin because once they're addicted to painkillers, the high they're looking to achieve just 'isn't there anymore'. They have to find a more potent opiate to satisfy their compulsive cravings and sadly heroin is the drug many prescription drug users are moving onto.

Young people don't understand what their misuse of narcotic pain medications can lead to and would never in a million years think someday they could be addicted to heroin and possibly end up in prison. Hopefully David McKenzie's experience with drugs which can be found on msn.com will make other young people think twice about drug abuse. Recreational use of prescription drugs can change a person's life forever and take you down a path that includes addiction, self-destruction and possibly incarceration.