Deadly Heroin Combos, is the More Intense High Really Worth the Risk? 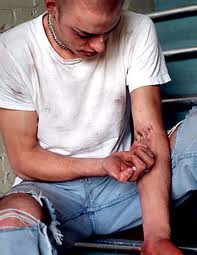 Heroin is an extremely powerful drug by itself that's taken the lives of many people throughout the years but today, heroin can be found mixed with other substances making heroin use even more dangerous and deadly. Some people are very fortunate, when they experiment with heroin use they're able to use the drug once or twice and walk away from it but that's not how it is for most people. Once most people start shooting up, smoking or snorting heroin, they're hooked and it's only a matter of time before they're addicted.

Today people are mixing drugs together attempting to increase their high but they're also increasing their risk of a drug overdose and death. Depending on the substance heroin is mixed with, a person can die the first time they use the drug to get high. Heroin that's combined with over the counter cold medications or Tylenol PM is called 'cheese heroin' and is a very deadly combo. Now there's another mixture of black tar heroin that's being abused, it's a combination of heroin and Xanax and appears to be even more dangerous and deadly than cheese heroin.

What astounds me the most is that some heroin users make their own deadly mixtures before they snort or shoot-up not realizing the severe risks their taking. They combine drugs like Xanax or medications like Tylenol PM to intensify their high and don't realize they're playing "a dangerous game of Russian Roulette".

Combining heroin with other substances is nothing new unfortunately. Many people have lost their lives in the past when combining heroin or cocaine with fentanyl. Fentanyl is used to treat severe pain and is way more powerful and potent than morphine is. Combining Fentanyl with other substance can cause a substance abuse overdose. People are risking their lives every day when they are abusing heroin but the risks continue to increase, when drugs are combined.

Heroin is relatively inexpensive today and that's part of the reason young people are abusing the drug. They just don't realize that it doesn't matter whether you snort heroin or inject the drug it's equally as deadly. People think that injecting drugs like heroin is risky and dangerous so they tend to snort the drug assuming it's safer.