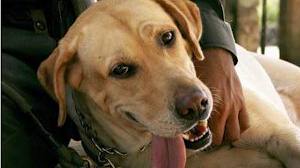 Drug dealers deliberately hook their dogs on heroin. People aren't the only ones that become addicted to drugs like heroin after repeated use, in Scotland some drug dealers resort to intentionally getting their pets hooked on drugs to make them more aggressive and hostile according to an article on Scottish News. Drug dealers inject their dogs with heroin and according to a rescue center in Scotland, out of every ten dogs, four of them are "hooked on drugs". Drugged dogs are even trained by drug dealers to attack anyone wearing a uniform according to Ian Robb from Angus Dog Shelter.

Lesley Connelly, a dog psychologist and trainer, said "it's easy to spot which drugs a dog has been given". Dogs given marijuana "are often very frightened, anxious and shake a lot" but the opposite is true for dogs injected with heroin according to Lesley, "they are unapproachable and aggressive".

It's sad to think that many of these animals have to detox after they're rescued and in some cases, have to be put down. It's dangerous and frightening enough when an animal accidentally ingests medications or other illicit drugs but to intentionally get an animal addicted to drugs like heroin or any other substance is just plain evil.

According to Pet Poison Helpline there are common signs to look for if you think your pet accidentally ingested opioids and opiates which include medications and heroin. These signs include walking drunk, vomiting, pinpoint pupils (dogs), dilated pupils (cats), severe sedation, and slowed respiratory rate, slowed heart rate, coma, and breathing stops.