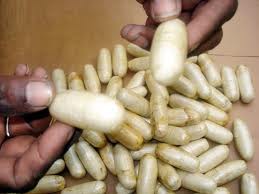 You may have heard of the terms 'body packing or 'body stuffing' but didn't quite understand what they meant. These terms are associated with the concealment of illegal drugs like heroin, cocaine, ecstasy and even some narcotics. When a courier or drug smuggler wants to hide substances when transporting them from one place to another, they will commonly conceal their drugs in tiny balloons, condoms or small packets. They will either swallow the drugs or hide them rectally or vaginally so they will be undetected by authorities.

Body packers are taking an enormous risk smuggling substances like heroin and cocaine internally, whether the quantity is large or small. There is always that possibility that the containers (balloons, condoms etc.) the drugs are hidden in before they're swallowed or inserted internally will leak or break. Most of the time a courier or drug smuggler will conceal a large quantity of illegal drugs at a time and if one or more of the packages ruptures or leaks, this can lead to a very serious heroin overdose which could end up being fatal.

This unfortunately happens quite often to body packers attempting to smuggle illegal drugs across the borders. Men, women and even children are either forced or willingly transport drugs by body packing and risk serious consequences when they do. The packets filled with drugs can get lodged in the bowel causing serious problems or rupture in the stomach or intestines. When there's a leak or a break, large quantities of the drugs go into the bloodstream which leads to an overdose or heroin death.

Body stuffing doesn't just take place for people attempting to smuggle drugs across the border or transporting substances from one place to another. Many people have also swallowed packets containing drugs when they were apprehended by law enforcement and unfortunately risk the same consequences.