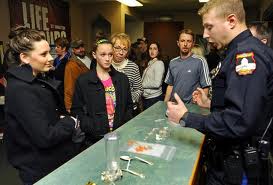 In years past inner city neighborhoods is where substance abuse more commonly occurred but that isn't the case anymore. High rates of drug abuse are just as prevalent anymore in middle class suburbs, upper middle class neighborhoods and in wealthier communities. Heroin is definitely becoming a drug of concern in many areas throughout the United States and not just a problem in lower income neighborhoods.

Accidental heroin overdose is increasing throughout the U.S. now that the drug is slowly replacing the abuse of prescription painkillers and it doesn't matter what a person's economic status is, heroin is a powerful drug that's affecting lives everywhere. Anyone that's ever lost a child or loved one due to heroin or any other drug use endures severe emotional pain and loss that never goes away. People are beginning to come together in communities to learn more about heroin because the drug is moving into their neighborhoods and destroying lives.

In DuPage County Illinois, Wheaton is a community where residents are coming together to learn more about heroin because the dangerous drug has not only moved into their community and surrounding areas, but lives are being destroyed in its path. Over a hundred people came together and attended a forum in Wheaton recently to discuss the "suburban heroin epidemic" according to an informative article on chicagotribune.com. In 2011 twenty seven people overdosed on heroin in DuPage County but sadly the numbers increased to thirty seven deaths the next year.