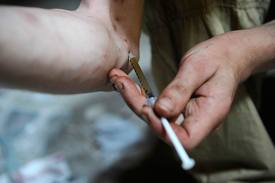 A form of heroin referred to as 'black tar heroin' is still being abused and illegally trafficked and smuggled throughout the country today. It's unknown for sure how many people actually abuse black tar heroin because most people just refer to their drug of choice as heroin. The consistency and appearance of black tar is different than the white or brown heroin which is a powder form, black tar is a sticky substance.

On the streets the black tar heroin is referred to as brown, tar, black, chiva, slab, and Mexican krud mud among other slang street names. According to Wikipedia, injecting black tar heroin destroys a person's veins and can cause life threatening infections.

Heroin no matter what form a person abuses is extremely dangerous whether you snort, smoke or inject the illegal drug. You never really know what poisons are added to the heroin that's sold on the streets either, strychnine is a poison that has been found in street heroin which makes the illegal drug even more dangerous.

Many people have also overdosed when using heroin which can happen no matter how you administer the drug. Some people think you have to inject heroin for an overdose to take place but this simply isn't true. No matter what form of heroin a person abuses or how a person takes the drug, an overdose can occur and the symptoms can include dangerously slowed breathing, convulsions, coma, and possibly death which has occurred many, many times.

There are other risks associated with the use of black tar heroin besides the ones listed above. In 2011 there were 2 cases of suspected botulism in King County WA associated with injecting contaminated black tar heroin. Texas had 4 similar cases in 2011 among black tar injection users. There's no way of knowing what's in the heroin a person is abusing and no way of ever knowing if the substance is contaminated either.

According to King County Public Health, paralysis of a person's breathing muscles can take place in serious cases of botulism and you could have to be on a breathing machine until you can breathe on your own. A full recovery can take months but if you don't receive medical treatment, a person could die.

The risks associated with heroin use are alarming, fortunately heroin seizures take place all of the time keeping some of this dangerous drug off the streets. CBP is part of the Department of Homeland Security and in December of 2011 they reported around 17 pounds of black tar heroin was seized worth around $230,384 dollars. The black tar heroin was hidden inside a speaker box and seized by the Border Patrol.