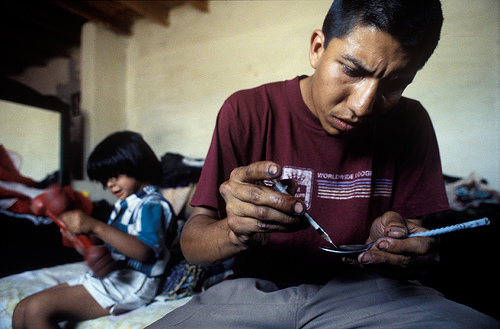 It doesn't take long after a person injects or snorts heroin for the user to experience the effects, the drug gets into the bloodstream and reaches the brain very fast where it's then converted into morphine and the user begins to experience feelings of intense pleasure. This of course can be very intense if the user administers high doses or for first time users. Chronic frequent users need larger doses to experience intense pleasure but they're also administering the drug in order to function.

Heroin is a very powerful drug and because the substance is highly addictive many people find themselves 'hooked' relatively fast. Pleasure is experienced rather quickly along with a warm sensation of the skin, their mouth becomes dry and their extremities like their hands, fingers, feet and toes experience a heavy feeling, possible nausea, vomiting and extreme itching. When these effects along with intense pleasure begin to subside, the user becomes drowsy which can last for several hours. During this time the heroin user's mental functions become cloudy and their heart begins to slow down. Breathing begins to decrease and this can be dangerous because sometimes breathing can slow down "to the point of death".

A major problem with heroin is that the purity varies and the ingredients mixed with the drug by the people illegally manufacturing heroin use toxic chemicals like strychnine, and anesthetics like procaine and lidocaine to cut the drug with. The additives are extremely dangerous once they enter into a person's bloodstream whether they inject the drug, snort it, or administer it any other way. This is why heroin is so dangerous and you don't have to be a frequent or chronic user to experience serious health consequences or death during use.

Opiate Dates you May Find of Interest:

No parent wants to get a call In the middle of the night or during any time of the day or week that their child overdosed on heroin or died as a result of overdose or drug related complications. At the same time, no child wants to learn that their parent is hospitalized or has died of a heroin or any other drug overdose, but unfortunately heroin overdose or heroin related deaths take place all of the time.

If you or someone you know uses heroin or is addicted to the drug seek help before it's too late. Heroin addiction is treatable and there are treatment options available today that help to decrease heroin withdrawal symptoms and cravings, successfully manage abstinence, and help you to reach your recovery goals. You owe it to yourself or someone you love and care about!