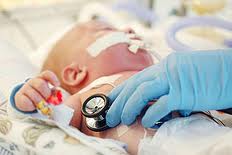 Neonatal Abstinence Syndrome can occur in a newborn if the unborn child is exposed to illegal drugs like heroin or even prescription drugs like Diazepam (Valium) while in the womb according to MedlinePlus. Amphetamines, Barbiturates, Benzodiazepines, Cocaine, Marijuana and Opiates are all addictive drugs that can cause neonatal abstinence syndrome if they're taken during pregnancy.

When a woman uses any of these drugs during her pregnancy they travel into an organ called the placenta which nourishes the fetus while in the womb, so if the mother is addicted to a drug, so is their unborn child. After the baby is born, addicted mothers don't realize their newborn is just as dependent on the drug as they are and now the infant is suffering from withdrawal.

Symptoms of neonatal abstinence syndrome may start as early as one to three days after they're born or may not appear for five to ten days. It depends on the kind of drug the baby was born addicted to, the length of time the drug was used, the amount of drug used, how the drug was broke down in the mother's body and if it was a premature or full-term birth.

There are many different symptoms babies suffering from neonatal abstinence syndrome may experience during withdrawal. Symptoms could include crying excessively, sucking excessively, trembling, problems eating and sleeping, irritableness, seizures, gain weight slowly, breathing may be rapid, and skin coloring may be blotchy, diarrhea, vomiting, sweating, fever, sneezing and stuffy nose, muscle tone may be increased, and reflexes may be hyperactive.