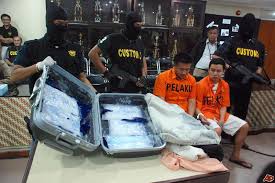 Drug traffickers will often go to great lengths to smuggle their illegal drugs into the United States or from one place to another. Some methods are quite bazaar and even unbelievably painful while others are just downright disturbing, upsetting and heart breaking.

News24 reports a forty four year old Colombian vet that had been hiding from authorities for eight years was finally captured recently by Spanish authorities. I feel the method he used in an attempt to smuggle drugs to be very cruel and extremely heartless.

According to the News24 report, the vets farm had been raided by Columbian authorities in 2005 where they discovered he had surgically implanted bags of liquid heroin into the abdomens of a half dozen live Labrador and Rottweiler puppies. Thankfully the Columbian vet was eventually captured even if it was over 8 years later and hopefully the puppies ended up being ok.

A more bizarre smuggling method was reported by The Telegraph recently. According to their report, authorities arrested a thirty three year old Panamanian woman at Barcelona airport for attempting to smuggle cocaine inside both of her breast implants, the drugs totaled 2.9 pounds. The woman claimed the surgery she underwent was forced on her by drug traffickers.