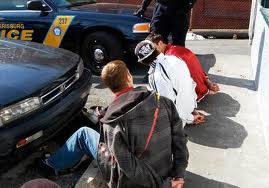 Nine hundred and fifty bags of heroin were found when police in Johnstown Pennsylvania arrested a suspected heroin dealer not long ago. The heroin was in baggies inside the home of Marco Crowe according to wjactv.com. Due to an undercover drug purchase back in August police were able to confirm the man was selling heroin. Street value of the heroin found was between twelve thousand and fifteen thousand dollars, which is a good size bust.

A 51 year old Patterson man was arrested recently in North Jersey for intentions of selling heroin and marijuana according to northjersey.com. Authorities found heroin in the man's back yard and in his basement. Police also found marijuana in the man's basement and over five thousand dollars in his home. Heroin found at the 51 year olds home was valued at $3,100 and the marijuana was valued at $500.00. The man faces several charges including "drug possession within 1,000 feet of a school and drug possession within 500 feet of a park".

9news.com reports that 4 Mexican nationals were arrested for the distribution of heroin in the Denver area to hundreds of young adults as well as teens. According to the article an investigation by the West Metro Drug Task Force began in early July and according to them, at least a half pound of heroin was distributed weekly. The investigators were able to seize heroin that was worth thirty six thousand dollars on the street, as well as seven thousand dollars in cash and vehicles.